We have been waiting for the right moment to mix things up at JACK and on the morning of the 18th of April we will surely do so. In a very rare after-party line up, the three original resident DJ's of JACK will have you moving and grooving at the official Labyrinth // Laserpoint party extension. Think Berlin, think London, think NY.. oh forget it, THINK HELSINKI PARTY VIBE ! 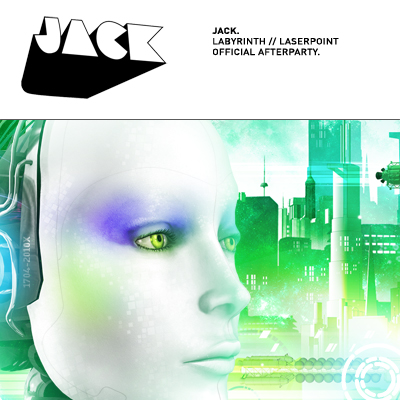 In the beginning, there was Jack, and Jack had a groove.
And from this groove came the groove of all grooves.
And while one day viciously throwing down on his box Jack boldy declared,
Let there be HOUSE!
And house music was born.

*sydän*OMG.. Cought in that much thinking.. Never here.

Just be present.
That´s where the miracle is..

JACK - The Official Labyrinth // Laserpoint Afterparty
The end of it all is not here... There will always be a beat to follow, a groove to move to and dance to share. JACK feels ecstatic to have you join him on the Redrum floor for the official afterparty of this white night.